The story of lake salmon 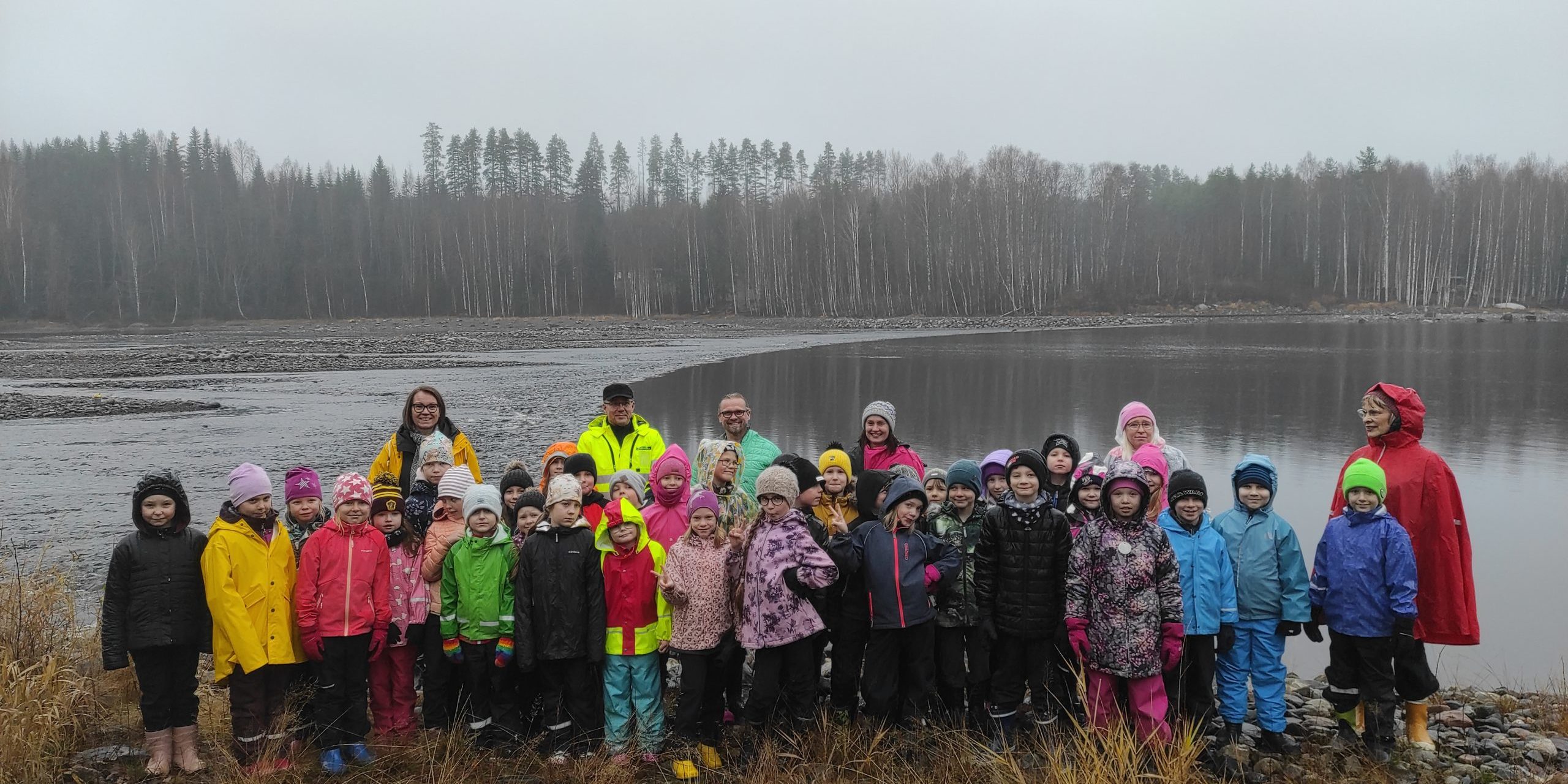 What a chance it was for the 2nd graders of Utra primary school from Joensuu, Finland to visit the Laurinvirta restored rapid at Kuurna canal power plant in Kontiolahti! The visit took place on Tuesday morning 8 Nov 2023. The rapid and power plant is situated just 20km north from the city centre of Joensuu. The visit was agreed between Environment Online ENO,  North-Carelian energy company PKS and sustainable engineering company Ramboll Finland. The visit was part of the 2nd graders international “Three Rivers” -project where three european classes from Finland, Spain and Bulgaria are collaborating to investigate the rivers they live nearby.

The students travelled by bus to the rapid where they were received and hosted by two Laurinvirta experts; head engineer of the restoration Mr. Mikko Ruokolainen from Ramboll Finland and director Mr. Jari von Becker from PKS. The classes had prepared for their visit by watching a documentary “The story of the lake salmon” where the project and the idea of restoration was explained. Also they thought in advance questions they would like to ask the experts. 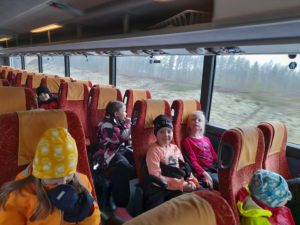 The students travelled by Savo-Karjalan linja buses.. The ride from their school to the rapid took about 20minutes. 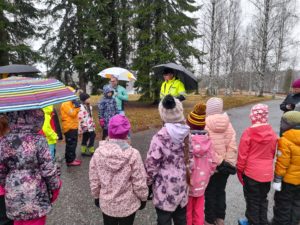 The visit started by the hosts explaining the Laurinvirta-project and the situation of lake salmon (lat. Salmo salar ouananiche). The experts explained that the Laurinvirta is actually an old Kuurna powerplants floodplain and it is the original breeding area for lake salmon. It is over a kilometer long and 100 to 300 meters wide. We learned that lake salmon is a very endangered fish species. Water power plants prevent the rapids from running free which the salmon needs to spawn the baby fishes. The landlocked salmon is the freshwater form of sea salmon, remaining in Lake Saimaa as a result of the Ice Age. The natural stock of landlocked salmon was mostly destroyed as a result of power plant construction and game stocks are now maintained by means of restocking (Read more).

Nowadays it’s a big trend to combine energy production and nature values or even to free rapids from the dams entirely to save the lake salmon. This has been done for example in Hiitolanjoki river in South-Karelia and the lake salmon returned to the rapid in large amounts even in the middle of the restoration process. The lake salmon has found its way to Laurinvirta but project is only in its early stages and its success needs to be followed. The next years will show if the lake salmon and also trout -which is a similar type of migration fish – will find their ways at Laurinvirta permanently and if the conditions are favourable for fish babies to survive there. We were also told that we could see researchers of LUKE Natural Resources Institute Finland and University of Jyväskylä that day at the rapid. They were there to explore the state of the baby fish production. November is a good time to search for the nests because the lake salmon comes to spawn in the rapids in the early autumn during the month of august. The baby fishes will hatch out from the eggs in spring during the month of May. 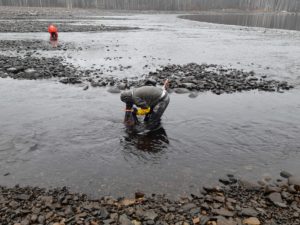 A special device is being used to stop the current to observe the baby fish nests. 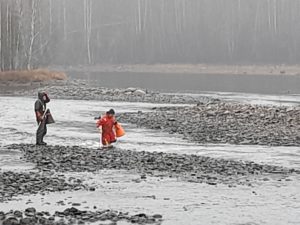 Students asked if the researchers were cold in the water. They explained that they use a special kind of clothes that prevent them from feeling the cold water.

The students and teachers had many questions for experts and they got a lot of new information concerning the lake salmon and its way of life. Here are the questions asked with answers:

1. Why are there banks made of gravel in the middle? Laurinvirta rapid is so wide and with the help of the banks in the middle the water is forced into smaller space so that its speed will rise. The lake salmon needs a certain flow rate in order to settle its eggs. The form of the banks and the rapid is based on the long term research of the experts who know what types of surroundings and circumstances the lake salmon needs and likes. The space available is being used well and is optimised very carefully.

2. What happens to fish eggs in the fast flowing currents? The reproduction of salmon is a smart collaboration between a mother and a father fish. Mother salmon comes to the currents and digs a depression in the gravel with her tail to deposit her eggs. A Father fish is waiting there to discharge milt over the falling eggs to fertilize. After that the mother fish covers the eggs with gravel to a depth of several centimetres which forms a nest (kind of a pyramid) on the river bed. The eggs remain there over the whole winter and the baby salmon hatches out during the month of May. 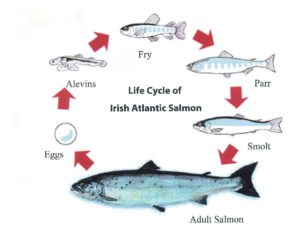 3. Why did you want to help the lake salmon? The situation of lake salmon has been critical for many years already. Many years have passed in planning about the situation and what could be done so that the natural cycle of life of the lake salmon could be returned. Together with researchers we started to think about this and arrived at this solution and compromise to restore the floodplain for its natural state.

4. What is the quality of water in this river? Actually the water of River Pielinen is quite good and clean for swimming and so but during the years, because of a lot of activity by the river (mainly agriculture and forestry), the water quality for fishes is not perfect and could be better.  The quality of the River Pielinen is being monitored regularly and from year to year the quality has luckily gone better. The water of the river is not drinkable.

5. How long did it take to build Laurinvirta? The process of building the Laurinvirta rapid has been multiphased. First the power plant was built and then an area for fishes started. This restored fish took about 3 months to construct. The whole project took almost two years.

6. Are there any other fishes in Laurinvirta other than lake salmon? Yes there are many other species too. There are trout, white fishes, roaches, perches, pikes, shines, burbots…even the quite rare grayling (harjus in finnish) which is a salmon species living mostly in Lappland. Basically there are and can be all the species of fishes that can be found in finnish lakes.

7. Where does the lake salmon come to Laurinvirta? The Saimaa lake salmon is very special for its behaviour because it does not wander all the way to the sea and remains inside Saimaa district lakes. There are three genetically similar lake salmon populations: one is here in Finland, one in Canada and one in Australia (if remembered well). So this salmon that comes here to create baby fishes lives in the wide area of lake Saimaa covering the area from North-Karelia all the way to South-East Finland. 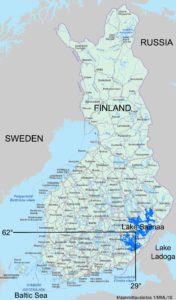 Lake Saimaa is a wide area

7. What is the size of the salmon nests? It is approximately 20cm from its diameter. The nest hole is being covered by small rocks and gravel from the bottom of the river.

8. Where does the name Laurinvirta come from? ( Rapid of Lauri where Lauri is a man’s name in Finland and virta means rapid) The name Laurinvirta has been the original name of this place and we have conserved it when restoring the rapid.

9. Have the salmon enjoyed being here? This project is quite new and we have been doing the tracking of the fishes for just a year or two. Actually this spring was the first time this rapid was in the state we designed it to be. It is certain that the lake salmon and trout have found their way here to spawn but it is still uncertain to know if the baby fishes will survive to grow as adults and how many they will be. This is the fact we are constantly following and this is why these LUKE and university researchers are here today. It might take 5 to 6 years until we know for sure the success of this project.

10. Where does the water come to this river bed? The water comes from the River Pielinen and is redirected here using the power plant in the upper reach of the rapid. The power plant has hatches that let the water flow into this river bed. Laurinvirta is like one branch of the river Pielinen. When we were constructing the rapid and river bed the hatch was closed so that there was no water coming here at all.

11. How many shovels were here in the constructions? There were 11 shovels. Maybe even 20 shovels at the busiest period because the area is wide.

12. Where does the sand, rocks and gravel come from? Most of the material used in the rapid bottom is being taken from this spot. The idea was to use the rock material found here as much as possible. Some sorted rock material has been brought from gravel intake areas situated nearby.

13. How about the vegetation under the water ? There was no vegetation in this place. The whole river bed was empty and rugged. We had to brough the vegetation here and do planting. Some of the plants have survived well but currents took away some of the vegetation unfortunately. Next year we will need to do more planting. There is a need for permanent green plants that gives protection to the baby fishes.  That also takes many years to establish. The positive sign was that we found some of the frog egg between the plants. Nature is taking this place more and more for its natural needs.

14. How come the lake salmon can find its way here? That’s a good question! A salmon is a little bit like a migration bird that always knows how to head to the south and how to return to nesting in its birth place or spot in the north. They have a genetic instinct that leads them. Yes they also have eyes, but they don’t use eyes for migration. Some say it is the smell of the water that helps the salmon to wander and find the right rivers. Nature is miraculous! 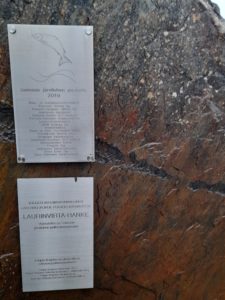 Memory stone of the project with all the members. 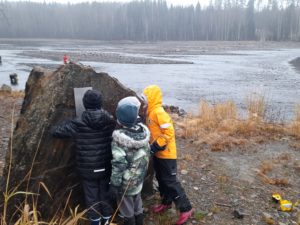 Watch the video of the visit: