My environment -project for secondary schools 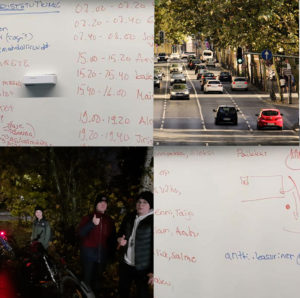 My environment -project for secondary schools searching for participants

ENO invites students to observe their environment nearby the school using natural science methods. What there is and what there isn’t? Is it calm or noisy, is it clean or messy? How? How is the recycling organised, are there a lot of traffic and population, is there gardens with playgrounds or are there forests? Can you see animals or pets around? How is the terrain -is it flat or hilly? Has the corona-virus crisis affected the environment? How?

Make the measurements with students and observations indicated in the forms. Compare the results. A online live meeting will be organised with students and prof. to discuss about the results in May. Interested? Send email and ask more: info@enoprogramme.org Read the students letter below and find the inquiry forms:


We go to Nepenmäki, which is a modern public school in Joensuu in Eastern Finland. It has about 500 students.  Nepenmäki has grades from 1-9 and our school is connected to a library. Like all finnish schools we have free school lunches every day, we also have vegetarian and gluten free meal options.

We can wear whatever we like and express ourselves in school. We aren’t very formal with our teachers, which is nice because we can joke around with them.


We live in Joensuu, which is a medium-sized city in the North-Eastern Finland. Joensuu’s population is about 76 000 people. Joensuu has a lot of hills and the land is quite varied. The city is built around a large river, which makes it beautiful and quite unique. Our city is a lively place, especially in the summer. It’s surrounded by vast forests, which are filled with hiking trails. During the winter it’s extremely cold and the ground is under a thick layer of snow.


Finland is a nordic country so it can be quite cold here. We have four seasons and our winters are dark and long but itś all made up for by our beautiful and nightless summers.

Our summers last for a couple of months so people spend most of it outdoors.

Finland is also known for being the home of santa claus, he lives in Korvatunturi. We even have his village in Rovaniemi and you can visit him there.In the winters many people do winter hobbies like skiing, downhill skiing, ice skating and also ice hockey.

Finnish people are really serious about hockey, we have even won the adults world championship once. Our ice hockey national team’s name is the Lions.


Finland is a long country so the weather conditions can vary a lot in the south compared to the northern parts of Finland. Most of our country is really sparsely populated except for our capital and its surroundings. Our capital is Helsinki and it’s located near the ocean in the south of finland.


Saunas are popular here and there’s usually one in every household. Some people don’t use them that often and some might use them every night if possible. It’s often used on the weekends.

Here are the links for the forms inquiries. There are 6 of them. We hope you respond to all of them.